Sign In or sign up
We missed you. You are just a step away from Signing in and then you are good to go.
Sarawati Accountants@Copyright 2017.
All rights reserved.
Choose your category

Employer
Sign In
We missed you. You are just a step away from Signing in and then you are good to go.
Saraswati Accountants Software Pvt. Ltd. @Copyright 2017. All rights reserved.

or
Facebook
Google
Sign Up
Already have an Account? Login
Employer Login
We missed you. You are just a step away from Signing in and then you are good to go.
Saraswati Accountants Software Pvt. Ltd. @Copyright 2017. All rights reserved.

or
Don't have account? Sign Up
Already have an account? Login
Employer Register
Incorporated in the year 1999, the journey of saraswati accountants began and progressed with software services and solutions.
Saraswati Accountants Software Pvt. Ltd. @Copyright 2017. All rights reserved.

Tally on Cloud is an on-line service which allows us to save our off-line tally data on cloud and allow us to access it from anywhere and from any device. 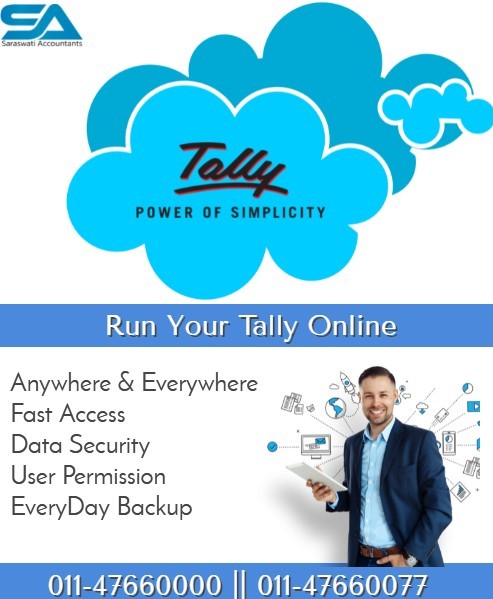 So, what exactly is GST?

Also known as the Goods and Services Tax, GST was brought in to replace the numerous Indirect Taxes in India. GST is one indirect tax levied on the supply of goods and services in the country. Brought into effect since July 1st, 2017, GST is comprehensive, multi-stage, and destination-based. It is necessarily levied on every value addition.

What are the advantages of GST?

GST brought with it numerous advantages. To begin with, it got rid of the cascading effect on goods and services. It got rid of the ‘tax on tax’ system by unifying the taxes and thus helped in reducing the final cost of goods to the consumers.

Another great accessibility factor of the GST is that it is all online. From application, to filing the tax, every single process is done online on the GST Portal. This makes the entire process easier, quicker and more accessible. Some other advantages of GST are mentioned below:

On December 22, 2019, the GST Council held its 31st meeting. Numerous notifications were release after the meeting detailing the various decisions taken in the meeting, most of which were beneficial to the common consumer.

To begin with, the GST Council decided to get rid of the GST on chequebook, ATM cards, SMS alerts and other such banking facilities for Savings Account Holders and Jan Dhan Account Holders.

Another great relief is coming for the traders – they will get relief on late filing of GST. The late fee will not be charged to traders who file their returns after December 22nd, or old returns till March 31st.

Along with this some items of regular use will also see a decrease in their tax slabs, thus making them overall cheaper. These include TVs (monitor less than 32 inches in size), computer monitors, power banks and digital cameras.

Another interesting change is on he sale of shoes or slippers. Till date, GST was being charged on their MRP, but with the latest changes, GST will only be charged on their base price, thus making shoes and slippers cheaper overall!

Yet another good news comes for traders with an annual turnover of less than Rs. 1.5 crores. For them, it is possible to submit monthly tax along with quarterly returns – all as per their convenience.

According to a post shared with Finance Minister Arun Jaitley, further rationalisation of the GST will include merging of the 12 and 18 percent slabs, thus making everyone’s lives a little easier. While there will still be the existing 0 percent and 5 percent slabs, the 12 and 18 percent slabs will be merged into a common number falling between the two extremes. This slab will be valid for all the common goods. Above this, only the 28% slab will remain for luxury, sin and demerit goods.

Arun Jaitley also suggested that the highest slab (at 28%) is, in fact, a dying slab. Currently, only 28 items are charged as per this highest slab. These include, but are not limited to, dishwashers, luxury and sin goods, auto parts, air conditioners and cement. The Finance Minister has gone on record saying that with the rationalization of the GST complete, only the luxury and sin goods will be a part of the 28 percent slab and everything else will be moved to the lower slabs.

Yet another hopeful news comes for those interested in buying property in 2019. The Govt. is planning to cut the GST on property under construction, albeit with some riders. Both Central and State Governments are working towards this common goal. There are currently two options in consideration. “The first option is levying 5 per cent without input tax credit (ITC) provided the builder establishes that he has purchased at least 80 per cent of material from a GST-registered supplier. The second option is 12 per cent with ITC,” a senior government official was quoted as saying.

The point of note here is that is GST is lowered to 12 percent, the effective rate will only be 8 percent due to abatement on account of the cost of land. But all this is still in the proposal stage and will first be vetted by Law Committee and the Fitment Committee. After this, it will then be placed in front of the GST Council which is all set to meet later this month.

Currently, the GST rate in real estate is 18 percent, but the effective rate of GST on purchase of under-construction or commercial properties from a builder directly which involves transfer of property in land or undivided share of land to the consumer is only 12 percent with full ITC.

This means that the effective GST is only applicable to two-thirds of the property being bought. With the GST being lowered further, this will come down even more, making buying property in 2019 a lucrative affair.

So, overall, as far as GST is concerned, we only have good news in store and the rest remains to be seen.

Latest Updation on GST for Tally